Programming by Eric Hilaire aka Majikeyric

Graphics by Nathan Asshantti aka Na_Th_An

Lala wanted to be a witch by all means, so she entered the Great Witch Academy, led by Mistress Morgana la Marrana, who admited her ‘cause she didn’t have any pupils because of the worldwide crisis. Morgana herself teached the very first basics of magic and sorcery to Lala, who was not a very good student. One day, Morgana ran out of chipped man bile, so she went to the supermarket to buy some and Lala had to stay on her own in the academy with all those machines and magic filters to her disposal. She began trying some spells, and as nothing happened, she just opened the windows so to freshen the air. But before she could be aware, all the pots with magical filters and chemicals flew off  thru’ the window scattering all around the surroundings.

Take control of Lala accross the decrepit surroundings of Morgana‘s academy, looking for all her filters and chemicals. To progress in your adventure you have to fetch and use some keys which will open a series of gates, giving you access to new areas.

Avoid the flying nasties and spike traps around the cemetary and the churches around, which can be really fatal. To regain some life, you can eat heart-shaped lollipops which will lay scattered here and there and which will appear once you’ve collected some filters and formulae, in screens already visited.

Use joystick in port 2, use left-right and fire to jump. 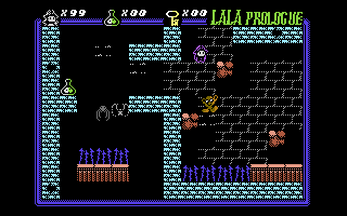 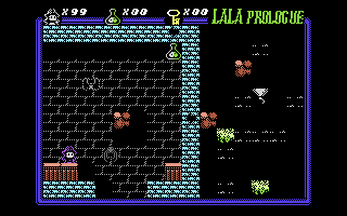 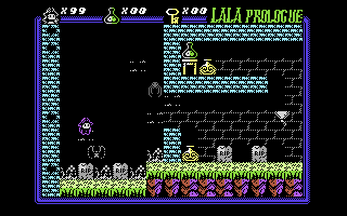 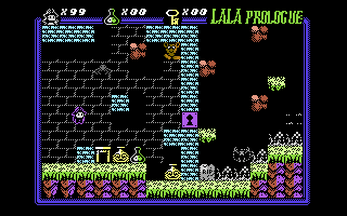 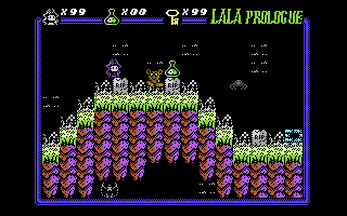 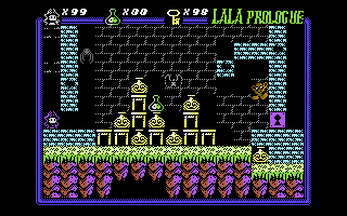